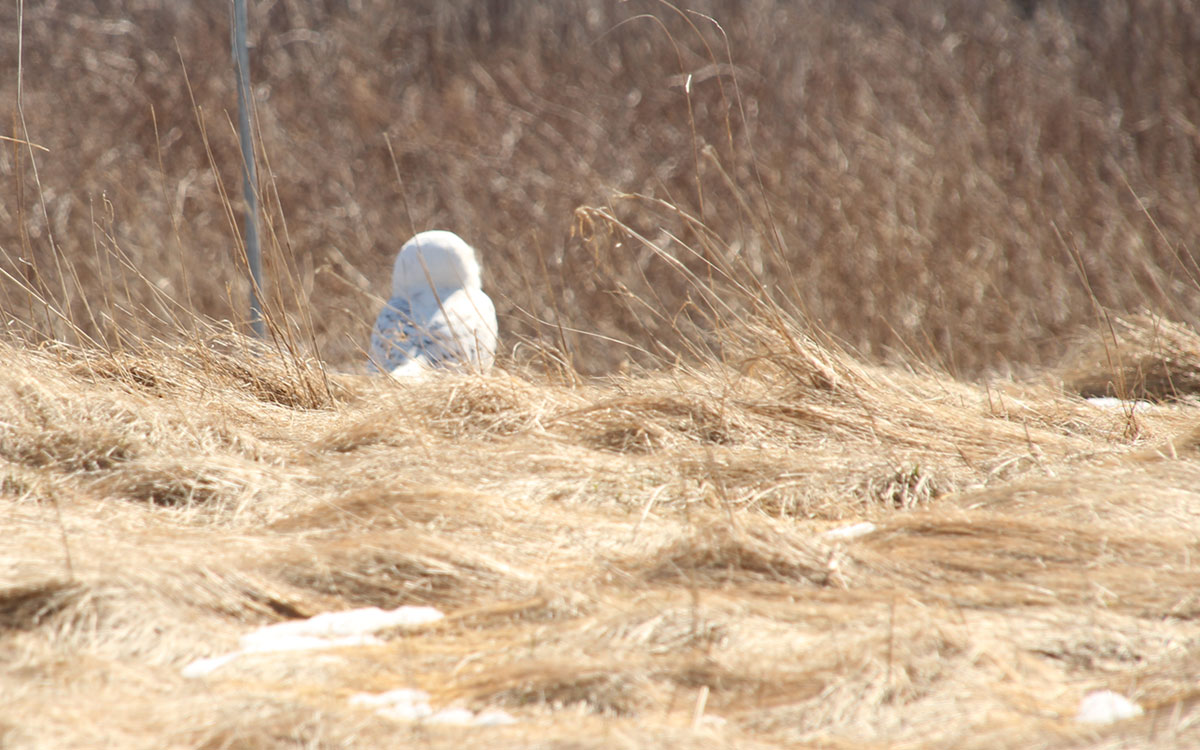 I was In Newport, RI for a weekend in early March, and I happened to pick up a copy of the Newport Daily News. One of the first things I noticed was a prominent photo of a snowy owl at Sachuest Point National Wildlife Refuge in Middletown. I’d never been there, so rather than spend time out at Brenton Point State Park, as I usually do, I thought it would be fun to check out Sachuest. My traveling partner, Mary Ann, was delighted at the idea of potentially spotting a snowy owl, so off we went.

First, a quick stop at the Newport Sweet Shoppe — what to buy?! The chocolate is so delicious there, and the cupcakes are pretty amazing too. I cannot go to Newport without a Sweet Shoppe fix. We had to settle for less than everything and pass on the cookies, which also taunted us from the cases. After carefully stashing our chocolate treasure, we headed out to the Point.

We had a nice drive along Easton’s Beach, and continued on. As we passed Second Beach and as we turned up the road to Sachuest Point, we saw a long string of cars parked along the side of the road and what appeared to be a full parking lot. “What a scene!”, I said, thinking of a friend’s description of a packed or interesting event… “it was quite the scene!” Might there be a snowy owl somewhere up there?

The Reluctant Owl and the Paparazzi

As we got closer, we could see a line of photographers along a fence, and in some areas the crowd was about four deep. (Bet there’s an owl up there on the hill!) Several cars circled the small, packed lot. As luck would have it, on my second trip around, someone pulled out, and we snagged a spot. We walked towards the fence where so many long lenses were pointed up at a grassy field to the left of the visitor’s center that abutted the parking lot. I think we found our owl!

Sure enough, in the middle of the grassy field that was covered with patches of snow, there was a white blob that we recognized as the snowy owl’s head. Mostly, the owl kept it’s back to the paparazzi, but every now and then, it swiveled its head to one side or another and gave the photogs the side eye before facing away once again.

Everyone was lying in wait for the owl to do something—turn, fly, anything. One little movement led to the sound of many cameras firing. I didn’t think I would get much of a shot with the lens I had. The owl would probably look like…a white blob in a field. But I had to try. So I joined the long line of photographers at the fence and took a few shots. The owl’s back to us, the side eye, a three-quarter turn. And after some time, the owl gathered itself a bit, as if it thought of resettling. 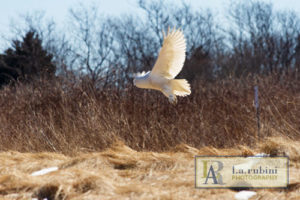 I began to shoot as it took off, and I captured its very short flight — a little bit of a fold, a wing span, and what looked to be a graceless headfirst drop and collapse into another part of the grassy knoll. Oof! 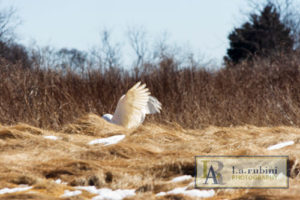 The head came back up. Once again it took up the position of silent sentinel, back turned to its eager audience. We continued to watch for awhile as the owl occasionally turned its head with a side glance to acknowledge the faithful. Then we decided to take a walk.

After a quick look inside the visitor’s center to orient ourselves to the Refuge, Mary Ann and I chose to walk a half-mile or so out to Flint Point. It had rained and snowed in the days leading up to the weekend, so we had brought our boots for the trek. But in our eagerness to check out the area, we left them in the car, so they were a bit useless. As we began to trudge along the muddy path, we thought to go back, but…how bad could it be? It soon became bad enough in areas to coat the bottoms and sides of our sneakers with mud, with the occasional deposit on top of the toes. Several times, I thought the sucking sound beneath my foot would be followed by my sneaker being left in the mud. But, catastrophe was averted. There would be no sneaker left behind.

We quietly took in the area to the fullest — the fields, the bramble, the view, the forlorn posts suggesting some sort of previous fence system. However, I also wanted to take some photos of said posts, fields, and views.

Not too far into our walk, I took a shot of the path that stretched out before us. Then turned to take a photo of a white branch reaching up like a sinuous snake from the brambles along the path’s edge. It was at this point that Mary Ann whispered, “Look! A deer!” I turned slowly. There was indeed a deer on the path ahead; it walked straight towards us as I carefully took a photo. We had stopped in our tracks, not wanting to startle it, but it was relatively unfazed by our quiet presence, or that of the person who trailed it from behind. It paused to take a bite out of the grass lining the path and then meandered into the neighboring brambles to partake of a more substantial lunch. 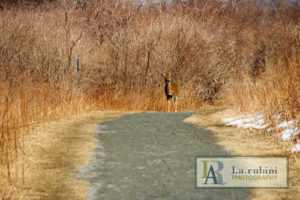 The deer made it’s way up towards us, so it was now to our left side. We stayed for some time and watched on, until a group of eager photographers surrounded us with their cameras and tripods. So, grateful for the time we had with the deer, we continued on our way.

At Flint Point we were treated to some stunning ocean scenery, sparrows along the path, cormorants and gulls along the shore, and a view across the Sakonnet River. It was great to hang out on the viewing platform for a little while and just soak it all in. We calculated that it would be just as far to travel back the way we had come as it would be to continue along the Flint Point loop. 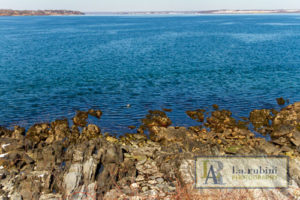 Perhaps the ocean path would be just a bit drier too? Turns out, it was slightly less muddy, and there were more great ocean views, including views of the Island Rocks.

We made several stops along the way to enjoy the pastureland on one side, and the gorgeous ocean view and rocky coast on the other. It was difficult to determine what other birds we may have spotted — if we had been armed with a scope or binoculars, we might have been better able to view Harlequin Ducks or the other approximately 30 species found at Sachuest. (The Point is renowned for its harlequin duck population.) The terrain of the entire point ranges from salt marsh, beach, and rocky coastline to upland fields and shrub dominated land.

The walk was inspirational. I look forward to going out there once again to explore.

Snowy owls can be found hunting lemmings and other prey far north of the Arctic Circle in the summer. The owls may migrate to Southern Canada and northern United States. They like to roost in treeless places and wide-open spaces and can be found on tundra, prairies, marshes, beaches, dunes, fields, farmlands, and along shorelines. The Audubon Society offers tips on how to view Snowy Owls .

Sachuest Point National Wildlife Refuge in Middletown, Rhode Island is one of five wildlife refuges in the state. There are traces of Africa along the shores of Sachuest Point in rock left behind when the supercontinent Pangea split about 200 million years ago.

During the 1600’s to 1900’s, the area was used for sheep grazing. During World War II, it was the site of the U.S. Navy Rifle Range and community center.

In 1970, 70 acres were donated from the Audubon Society Rhode Island to establish the Sachuest Point National Wildlife Refuge. Land transfers from the Navy increased the total size of the Refuge to approximately 242 acres.

The Refuge is a stopover and wintering area for migratory birds. The Refuge is the second largest wintering population for harlequin ducks on the Atlantic Coast.

Opportunities to experience new things are all around you. Sometimes the most inspirational adventures are ones undertaken not he spur of the moment.

When you get the call to explore, act on it.

Take your time—don’t hurry through.

Keep your eyes and other senses open for new experiences.

Use your time outside to jumpstart your writing, drawing, thinking, or problem-solving later.

Do you want to learn more? Do it.

(This excursion awakened a curiosity about Snowy Owls and views of the rocky coastline encouraged me to learn a bit more about the geology of the area.)