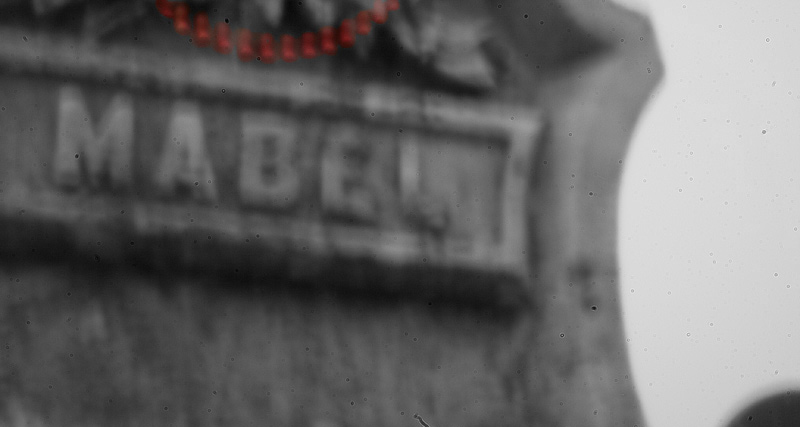 Years ago, I was on a mission to shoot a couple of other subjects in Provincetown, but because it was a gray, windy, foggy, cool, somewhat drizzly morning, I thought it would be an opportune time to spend an hour in the cemetery. So, off I went on a bit of an “artist’s date”. It also proved convenient that a friend was visiting a resident of the assisted living facility in town, which is oddly located across from Provincetown Cemetery and alongside St. Peter’s Cemetery. I spent the majority of my time in the Provincetown and adjoining Gifford and Hamilton Cemeteries, but also passed through St. Peter’s.

Pinhole Photos with a Digital SLR 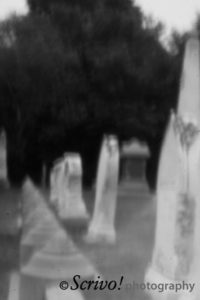 I decided to take pinhole photos, using an old Canon digital SLR with a pinhole body cap (actually for an old Pentax) held over the body in place of the lens. Shooting this way exposes the inside of the camera to dust, so I would not recommend doing this unless you don’t care about the camera you are using for this type of photography. There were the inevitable goof ups and light leaks, possibly a stray finger, and movement aplenty, but the point was to just shoot down and dirty and quick and get a soft look with some ghosting effects. I didn’t worry about the many dust critters that were also revealed as I felt they added a little “je ne sais pas quoi” to the shots.

Working with the digital SLR was definitely easier than carting around the homemade pinhole “one shot” cameras I made while taking a class at the FAWC (Fine Arts Work Center) with Marian Roth  some years back. I could more easily adjust the exposure time and determine if I had captured what I was after by checking out the LCD display on the back of the camera. 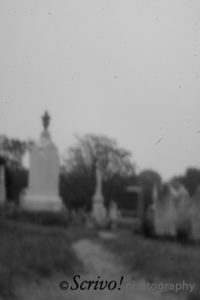 I got some interesting shots and found a lot of inspiration from my quick one hour walk through the cemetery. A favorite shot was a shot of “Mabel’s” headstone. It caught my eye for two reasons. First, a strand of beads had been draped over her headstone, perhaps placed there by partiers from the night before. Second, it reminded me of a friend of my grandfather’s named Mabel, and it brought up some old memories.

I shot the photos in color and stripped the color back when I processed these photos in Photoshop. For this purpose, I decided to make only the following adjustments in Photoshop: a black and white adjustment layer for all three, and I brought back the color in the beads around Mabel’s headstone. Other than that, I decided to just keep the pics “as shot” — no extra processing.

Other notable memorials include Arctic explorers and researchers Donald Baxter MacMillan  and Miriam Look MacMillan. According to her bio on the Bowdoin website, in 1981 Miriam was one of only a few women accepted into the Explorers Club at the time. Poet Stanley Kunitz  and his third wife, painter and poet Elise Asher Kunitz, are also buried in Provincetown Cemetery as is artist Max Bohm.

Saint Peter’s Cemetery is in close proximity to Provincetown Cemetery, located on the other side of Alden Street.

Cemeteries are a great place to walk. They tend to be quiet, so it’s easy to get lost in thought. Older cemeteries may be the final resting place of famous writers, artists, politicians, etc, and a place to pay your respects and reflect on their lives. Headstones can bring back memories of people you’ve known, loved, and lost or can inspire you to write a story, tell a tale, or create artwork.

Is there a cemetery near you? Plan an hour or so to take a walk. Find a headstone that interests you. What about it interests you? The name? The dates? A quote? Make up a story about that person — or that family.