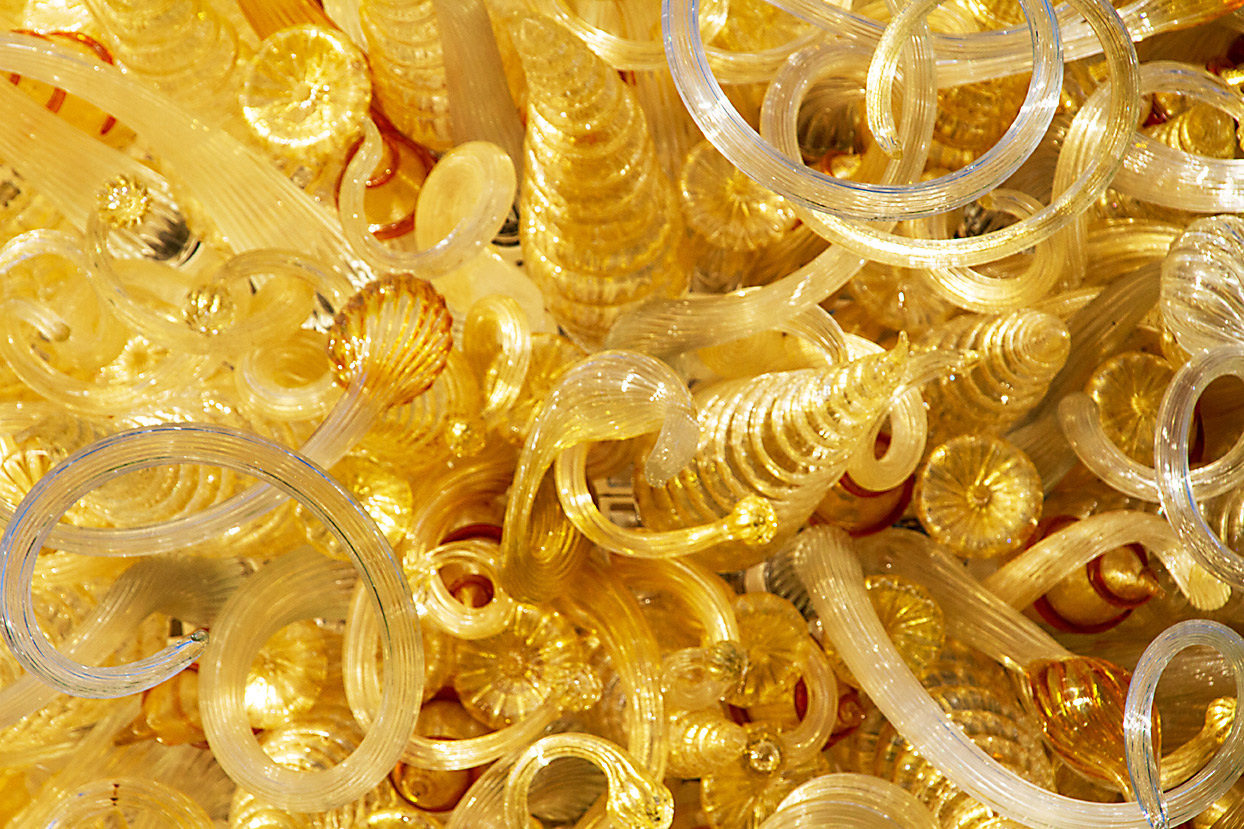 During a trip to see Mary Ann’s brother Tim last year, we had already visited the beautiful and impressive Biltmore Estate in Asheville, NC. So, we had not planned to go again. That is, until we saw an exhibit of Dale Chihuly at Biltmore Estate would be there. Game changer. How could we stay away? I arranged to get tickets for Chihuly Nights, offered on select evenings during its May to October 7thrun, for the three of us.

We originally planned to arrive early, enjoy a wine tasting and dinner, and see the pieces in the daylight and again during and after sunset. However, we arrived later than planned. While this affected our ability to see all the exhibit pieces at night, the pieces we viewed during the daylight and early evening were more impressive than I had originally anticipated. As we approached the front of the estate, we spied the first exhibit, Sole d’Oro (2017), or “Golden Sun”. Golden, clear, yellow, and red-brown textured glass curled out from the core and ended in delicate tendrils and shell- and flower-like forms, balls, and cones. The work is composed of 1,300 pieces of individually blown glass. We had the good fortune to view it again as we exited. It was equally breathtaking at night with Biltmore in the background. The Sky Blue and Cobalt Fiori (2017) piece, along the front windows of the Winter Garden, was composed of blue and cobalt reeds and curly tendrils grouped like “plants” growing up from the crush stone base. Orbs of all sizes were scattered around the area. The glass was arranged around a small rectangular stone water fountain. The only exhibit inside the house transformed the center of the Winter Garden into a wonderland of glass that shone in the sun streaming through the glass windows of the cupola above. Laguna Torcello II (2018) was created specifically for the Biltmore exhibit. Gold, black, yellow, white, and brown glass along with some pure white structures rose from a black base that produced outstanding reflections and depth. Reeds, tendrils, wild sculptures, clamshell-like pieces, and pieces with delicate starfish and shells were reminiscent of sea life and the flow of water. Sheltered beneath the Pergola were the pieces that comprised the Pergola Garden Fiori (2018). The glass pieces were grouped in greens and blacks, black and white, blue and purple, shades of blue, and fiery reds and oranges. The blue pieces with the tips curled back looked like jets of water from a fountain ending in water droplets. The green and black pieces reminded us of sinuous cobras twisting up and preparing to strike.

In the Italian Garden Pieces in the Italian Garden, which has wide paths surrounding three pools, were impressive in the full sunlight. In the first pool, Float Boat (2017) was filled with vibrant, wildly colorful and textured glass orbs.

Even more glass orbs—Niijima Floats (2018)—“floated” in the surrounding water. Their shadows in the water were brilliant and perfect in the sunlight and created the illusion of a double circle shape. In the central pool, Palazzo Ducale Tower (1996) blazed upwards like a white hot squirming tower of light. naturally from the water. The final piece in that pool of the Italian Garden was Fiori Boat (2017). A riot of mostly red, yellow and orange shapes thrust and curled upward from this second the boat. It was a spectacular and playful ending to our garden walk.

To the Walled Garden On the walk to the Walled Garden, we passed Red Reeds (2017). These grew up from a lush, green hillside. In the garden, two tall pieces were located on either side of the path to the Conservatory. We stopped for quite some time to take in the Electric Yellow and Deep Coral Tower (2017), located on the left. Tendrils of reds and yellows were interwoven with slightly clearer glass visible throughout and on the uppermost tips. Its uppermost were a welcome perch for a songbird, and many had gathered to listen to the trills. The piece on the right, Paintbrush Tower (2014), was also a lure for the songbird. This piece was a little shorter, but the reds and yellows seemed more segregated and saturated, while the top pieces were yellow with red tips. Both pieces looked simply fiery as the sun began to descend. Outside of the Conservatory, along the patio edge, there were Cattails and Copper Birch Reeds (2015) set along the bottom of the hillside on both sides of the stairs. Inside the Conservatory, three large Burnished Amber, Citron, and Teal Chandeliers (2015) hung suspended from the ceiling and reminded me of a group of octopi.

We managed to make a quick stop at Antler Hill Village to see the final two pieces, which were ablaze with light in the dark. The spikes of the Alabaster and Amber Spire Towers (2017) fanned out sharply in the darkness. The Turquoise and Erbium Fiori (2017) were aglow and nestled in a fountain. Gently wavy and curvy, textured, blue pieces rose upwards around textured purple and blue reeds.

I would have loved to see the exhibit a second time. It inspired all of us. If you have a chance to see a Chihuly exhibit, do so.

And give some thought to other art experiences that might open up new doors to your creative endeavors. Experiencing other mediums has definitely impacted some of the design and photography work I’ve created. I’m sure it will for you as well.

Dale Chihuly is an American glass sculptor and entrepreneur. His work in blown glass has moved his art into the realm of large-scale sculpture. Following an eye and shoulder injury, he moved towards directing a team of artists to create his glass sculpture designs.

The Biltmore Estate is a large (over 10 square miles) private estate and tourist attraction built by George Washington Vanderbilt II. Construction began in 1889 and continued into 1896.

The landscape of the Biltmore Estate was created by the American landscape architect Frederick Law Olmstead. (He also designed World’s End.)

Visit an art exhibit. Is there one you have really wanted to see? Or perhaps there is an exhibit you might not necessarily think of going to. Challenge yourself to think out of the box.

If you view the exhibit with others, talk about what the work evokes in each of you. How do you and others experience what you see, hear, feel? Are there similarities? Differences?

How might the experience influence a project you are currently working on?

Can you apply your experiences to a new project?

Does the exhibit motivate you to learn more? Take a class? If so, resolve to explore that space more fully.